Delivery Brandy Old Kakheti 3 stars around the clock in Kiev 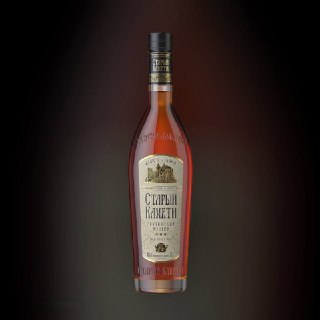 Brandy is a beautiful straw color.

Gentle and pleasant fragrance with tones of flowers and vanilla.

The brandy has an intense warming taste with fruit tones.

Brandy will serve as an excellent digestif, and the drink is also recommended to serve with coffee.

Old Kakhetian Cognac is a Georgian drink produced by the Kakhetian Traditional Winemaking Company. The brand is a descendant of the cognac distillery founded by Antimoz Chkhaidze in the late 19th century. Old Kakhetian cognac is made from Kakhetian wines based on rkatsiteli grapes. The beverage is famous for its ancient way of production and ageing in special Georgian oak barrels "Iberica". Brandy "Old Kakhetia" is bottled only after tasting by the "Council of Seven Elders" which guarantees its high quality. The color and flavor of the drink depend on the aging. Brandy of three years ageing has straw color, brandy of four-five years ageing - amber and Kakheti of seven years ageing - nutty. Old Kakhetian brandy has a warming taste with grape tones. Drinks of five or more years of aging have a pleasant aftertaste. The history of old Kakhetian brandy dates back to the 19th century. That was when Antimoz Chkhaidze, a famous Georgian winemaker, founded his brandy factory in the village of Askana in Guria. He built wine cellars where spirits were stored in oak barrels buried in the ground. Grapes for "Old Kakheti" are grown in the vineyards of the three regions of the republic: Kindzmarauli, Vachnadziani and Manavi. Thanks to modern equipment, almost all processes - grape harvesting, production and bottling of brandy - have been modernized. New technologies were introduced at the company by the major Italian company Della Toffola. The production process consists of several stages. Berries, picked at a certain time, are pressed, and as a result of the fermentation process wine is obtained. The liquid is distilled twice in alambics, copper cubes, and then the resulting alcohol is poured into large Iberian oak barrels. The spirits are aged for quite a long time, three to seven years. There are special workers who mix different spirits. The resulting mixture is then infused for 4 to 12 months, and only then is the brandy bottled. The taste, density and rich aroma of brandy - all this gets "Old Cachetia" during the period of aging. The drink's admirers advise to pay attention to the drink's temperature, if you want to feel the variety of flavors and the true taste of Kakhetian brandy. The temperature should not be lower or higher than 20 degrees. A chilled Old Kakheti won't manage to reveal the rich palette of flavor nuances and variety of aromas. Overheated brandy will noticeably change its original qualities and taste characteristics. The connoisseurs of "Old Kakheti" drink it in small portions - 50 ml. Among the appetizers and dishes there are several names that fit the drink and emphasize its flavor qualities. All the necessary snacks and drinks for your taste will be delivered to nightlife in Kiev after 23:00 Lomka Bar.
Home Payment/Delivery Categories
Beer Vermouth Wine Whiskey / Rum Vodka Cognac / Brandy Liquor Tequila / Gin The drinks Snacks
About us
ru | ua | en
русский военный корабль - иди Н@%УЙ!